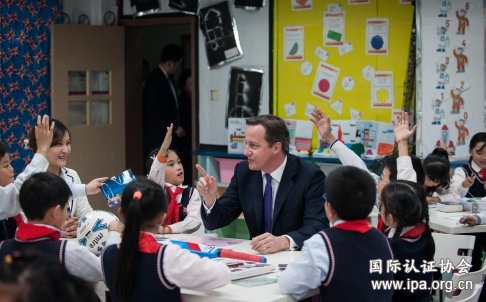 David Cameron speaks with children at a primary school in Chengdu

Forget French, it’s time to learn Putonghua, said David Cameron as he wrapped up a visit to China on Thurday, accompanied by six government ministers and the largest trade mission ever led by a British prime minister.

“Learning English is a key part of schooling for these Chinese 6-year-olds. More British children should learn Mandarin”, Cameron posted on Twitter and Facebook as he sat in the classroom of a Sichuan primary school.

“By the time the children born today leave school, China is set to be the world’s largest economy. So it’s time to look beyond the traditional focus on French and German and get many more children learning Mandarin,” Cameron was quoted as saying.

The British government has announced an expansion of the UK-China School Partnerships programme, which will provide funding for study visits to China for 60 British head teachers and aims to double the number of Chinese learners in Britain to 400,000.